We are going to take a look at the current interest rates in bitcoin lending.  Why is this important?  In addition to being a way to make extra income from your fiat (“real” currency) or bitcoin holdings without selling them, these interest rates indicate traders sentiment about the relative values of these currencies in the future.  We will look at bitcoin in this post, because it is the largest cryptocurrency, both in terms of market cap and trading volume.  As of the date of this writing here are the top 4 cryptocurrencies by total market cap.  Information from http://coinmarketmap.com.

The Bitfinex Exchange is one of the exchanges that allows margin trading, and also customer lending of fiat and crytpocurrencies.  They call the lending exchange funding and it works with an order book just like a regular trading exchange.  Customers submit funding offers and requests, and the exchange matches the orders.  So, for example, I could offer $USD800 for 4 days at .0329% per day (12% annually).  This get placed on the order book.  Someone else could accept that offer, and then the loan happens.  As the lender, I get paid interest daily at the contract rate, paid by the borrower.  Now, what does the borrower do with the proceeds?  They can’t withdraw the money from Bitfinex, this is not a general personal loan.  They could use this money to buy bitcoins on margin.  There are specific rules on how much they can borrow at purchase, and how much margin they must maintain in the future.  We won’t go into the specifics of those rules in this post, but just be aware that the exchange can liquidate, or sell, a position to maintain margin requirements.  In fact, this is what caused the recent meltdown in the Ethereum market at one exchange (GDAX) Ethereum Flash Crash, as traders had their positions liquidated automatically for margin calls.

So, show me the data! 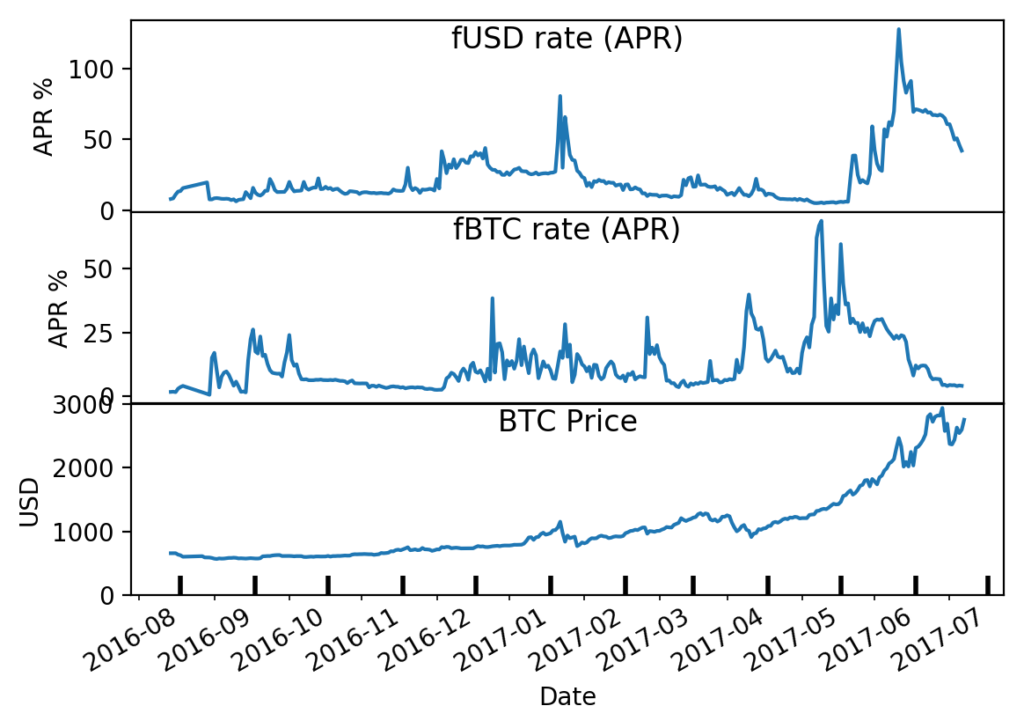 In this chart, fUSD is the funding rate as an APR for $USD, and fBTC is the funding rate for bitcoin (BTC). These are based on a small sample of 2 day loans actually traded on that day. The first thing to note is that the rates are quite volatile, reaching highs of over 100% (USD) and 50% (BTC) during the last year. The current rates (June 2017) are around 40% (USD) and 4% (BTC). 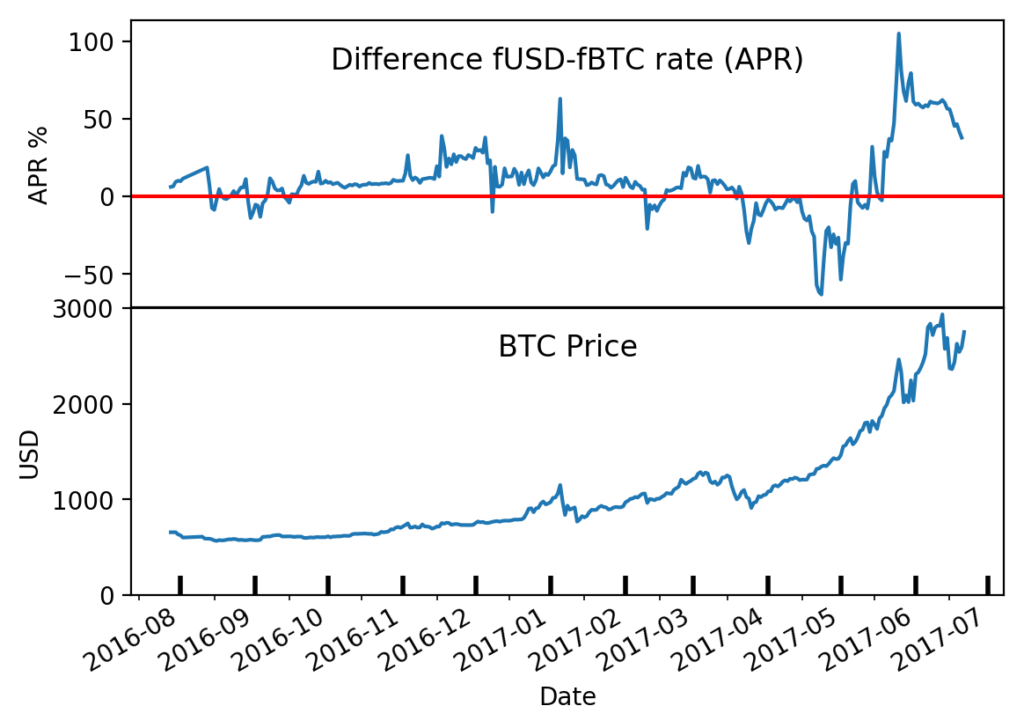 Note that it switches around both sides of zero.  Between approximately 15 Mar 2017 and 1 May 2017, it was negative, meaning people were demanding higher rates to lend BTC than to lend USD.  Perhaps this is an indication that people wanted to short BTC at that time – although we don’t know which fiat currency they were shorting it against.

Another thing that we can pull from the data is the yield curve.  In the bond market, this indicates the interest rates for bonds at different maturities, for example, a 30 day, 60 day, 1 year, etc.  In the case of Bitfinex, the loans can only be made for 2-30 days, so we have a more limited set of possibilities.

You can see the curves are relatively flat, but they only go out to 30 days, so we can’t say much about 1 year rates. Note that most of the volume is at the extremes, that is 2 days or 30 days, so the numbers in between are not that meaningful.

In post to come, we will look at Bitcoin futures, to see how their pricing might be related to the uncovered interest rate parity. Stay tuned.